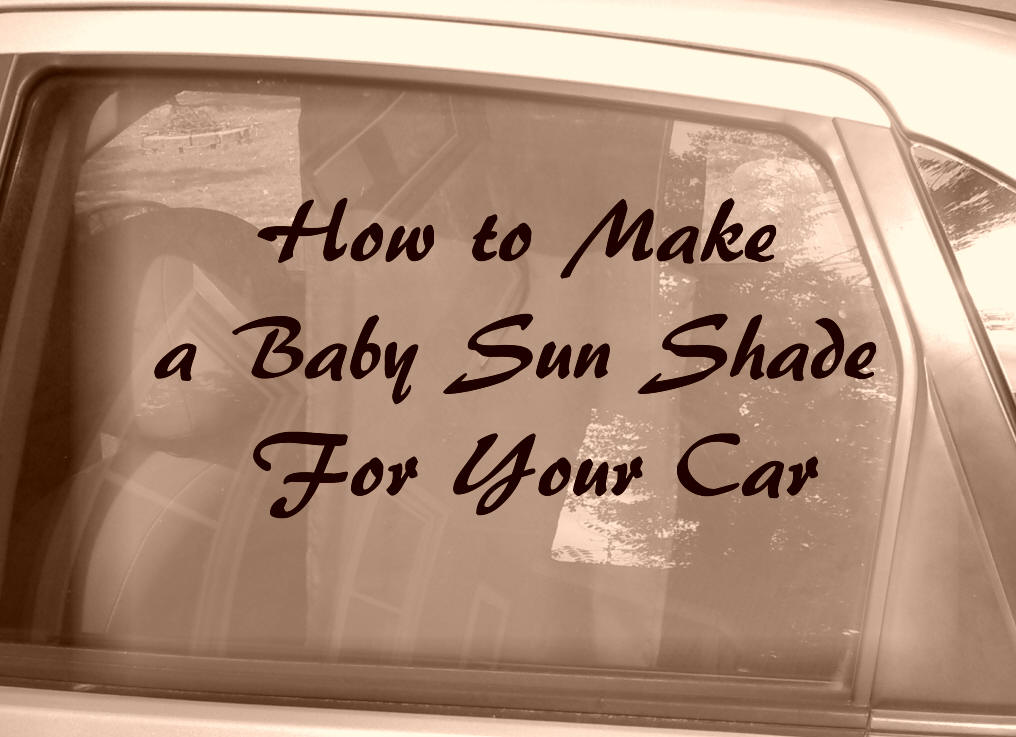 If you’re anything like me, you forgot to put a sunshade for the car on your baby registry. Being a first time mom can be pretty overwhelming, and there’s so much you don’t expect.

But then I noticed that the sun was shining in my baby’s eyes, which is uncomfortable, and possibly bad for her, what with UV rays and all that. So, I went looking for a DIY pattern for a sunshade, and thought about what would make it easy to use, cute, and effective, and decided to make my own.

Here’s a tutorial so you can make one too. It cost me $0.57 because all I had to buy was the dowel. I happened to have everything else lying around already. But you could easily do it for less than $10. And it’s really really easy. Even with taking pictures of every step, it probably took me about an hour and a half. (If I hadn’t been taking pictures, it probably would take about 40 minutes or less)

To start with, you need to figure out how long you want it to be. I drive a small car, so 36 inches was perfect to reach from the handle over the door to the seat below. I decided to make it 14 inches wide so it would block the sun from the baby, but not take too much room or be too bulky. If you drive a larger vehicle, you might want it a little longer, but it would probably still work.

Once you decide how long you want it to be, add 3 inches to the length, and two inches to the width to make room for your hem. (You will want your fabric to be at least 2 inches wider than your dowels are long. 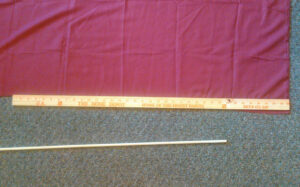 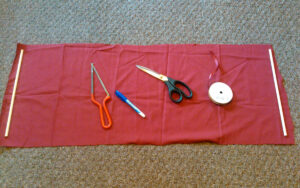 Iron about half an inch down on each end, then fold that over and iron about ¾ inch down. This will be your sheath for the dowels. 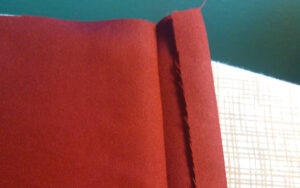 Next, before you sew the sheath together, you want to cut your ribbons and sew them on to the top. Cut 2 pieces about 16 inches long, and one about 18 inches long. The shorter ones will be to tie your shade to the handle over the door, and the long one will let you tie the shade up when it’s cloudy, or your baby isn’t riding with you. You’ll want to cut them at an angle like you see in the picture, otherwise they can unravel. 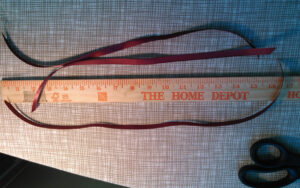 Sew the middle of each length of ribbon to the fabric along the line you ironed. The long one should be in the middle, the short ones should be about 3 inches away on either side. 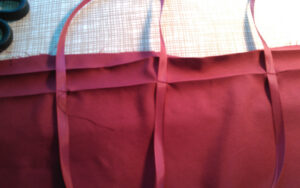 Once those are on, go ahead and sew the sheath shut. Put the dowel inside. Do the same to the bottom. 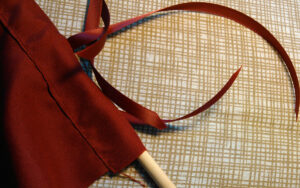 Hem both sides. You might find that you have to move your needle over to the left side to sew the part near the dowel. 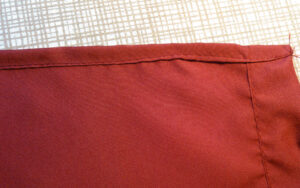 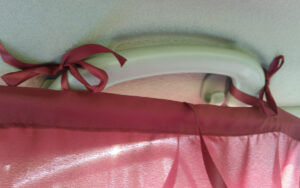 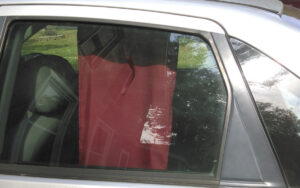 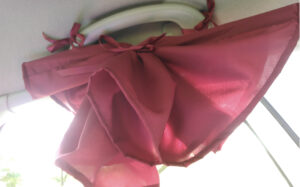 See it here as well, along with a whole bunch of other fabulous ideas. Check it out! 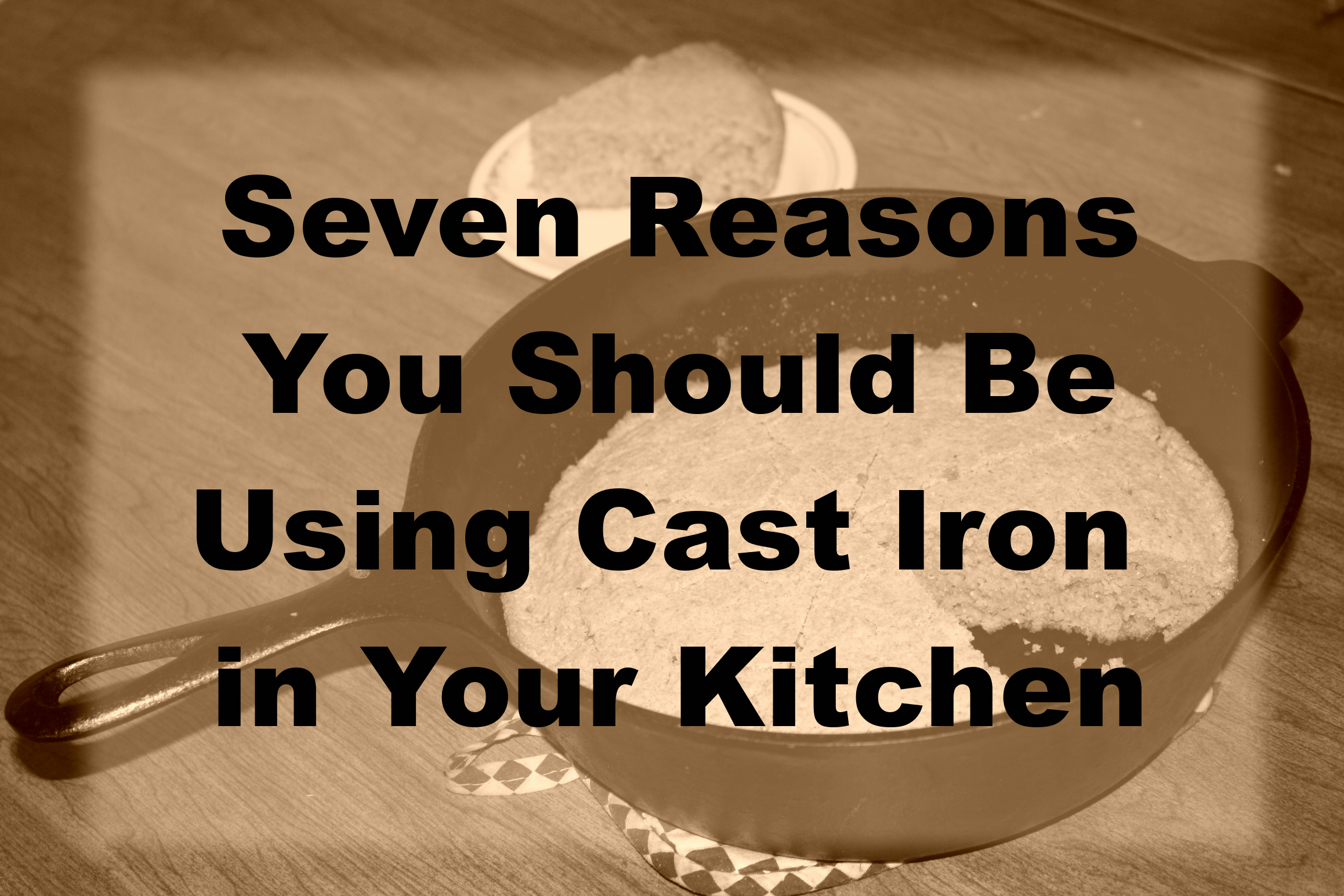 Cast iron is making a comeback. No longer is the cast iron pan just some mysterious blackened old thing you saw at your grandmother’s house, or at the old neighbor’s estate sale. A cast iron skillet is an important part of any well-equipped modern kitchen. Here’s a few reasons why.

Cast iron takes awhile to heat up, but once it’s hot, it’s very hot. A cast iron skillet is an economical alternative to having a flat-top grill permanently installed in your kitchen.

The thickness of a cast-iron skillet allows it to store up a lot of thermal energy from the burner, and so throwing meat into a pre-heated pan doesn’t cool it down much. The pan stays hot even after the meat is seared on one side. This lets you get the scrumptious seared look on both sides of your meat, without having to leave your own kitchen or spend a fortune on home improvement and difficult to maintain grill surfaces.

It’s also ideal for grilling vegetables. All you have to do is preheat a few teaspoons of your favorite cooking oil in the bottom of the skillet, and throw your sliced fresh vegetables in. The hot pan stays hot after the vegetables are added, and so instead of the boring, soggy, or burnt vegetables that you might get from a thinner pan, With just a little stirring, you’ll be able to serve deliciously caramelized ones, in just a few minutes.

While some of the concerns about non-stick pans are thought to have been overstated, (according to the FDA, the chips of Teflon that flake off an old or poorly maintained pan won’t actually poison you, but just pass through your body harmlessly) it is generally agreed that overheated Teflon pans do release harmful vapors when heated over 500 degrees.

Cast iron, on the other hand, does not have flouride compounds involved in its construction, and so can be heated to higher temperatures safely. About the worst thing that’s going to come off your cast iron pan if you make it too hot, is a little smoke from the oil it was seasoned with. If you have a jumpy smoke detector, it could be a nuisance, but it isn’t likely to cause any health problems.

It can be used in oven or stove top

Some recipes call for starting on the stove top, and finishing in the oven. Most skillets have insulated handles, however, and these don’t hold up well to oven temperatures, however nice they are for holding onto while in use on the range, and conversely, most baking dishes for the oven will crack or burn the food if put directly over a flame or heating coil. Cast iron, however, has neither of these disadvantages.

Pancakes are one of the more wonderful things in life, but they require either an oiled, or somewhat non-stick surface. They also need a hot surface, so you might want to think twice about using your Teflon pan. Besides, pancakes are best turned with a good metal spatula, and metal implements shorten the life of your non-stick pan. If you have a flat top grill in your kitchen, you’re all set, but let’s face it. Most of us don’t, and (we don’t have the space for one either) Once again, the cast iron skillet can come to your rescue. A properly seasoned pan, especially one that is nice and hot, is nearly non-stick. (I do still use a small non-stick pan for making omelets, but omelets are a special case.) And you can use your metal spatula with reckless abandon, because it’s not going to hurt your pan. Which leads to the next reason:

There’s a reason why cast-iron pans have been around for so long. It’s partly because once there is a cast-iron pan, it’s going to be around for awhile, and some people even say they are better the older they are.

There’s only a few things that can permanently damage your pan. One of them is dropping it onto a hard surface. This can sometimes crack a cast-iron skillet. It’s not too great for any of your other kitchen tools either.

Other things that would ruin your pan for good:

Heating it up really hot in a bonfire, and then throwing cold water on it.

Leaving it in the rain and sun for several years until it rusted through.

Pouring hydrochloric acid into it and letting it sit for awhile.

As none of these are things that are likely to happen by accident, except dropping it, your pan should be a pretty safe investment.

What is a bit more fragile is the “seasoning” or thin coating of polymerized oil that builds up on a pan that is used frequently. Most new cast-iron iron pans you can buy today come “preseasoned” but the seasoning will improve considerably with time and proper use.

To properly care for the seasoning of your pan, it is recommended that you don’t let it soak in water, and don’t simmer acidic things, like tomato sauce, in the pan.

Even if you do damage your pan’s seasoning, however, it’s not too hard to reseason it. Lodge, a distributor of cast-iron cooking tools, recommends oiling your pan and baking it upside down on the top rack for an hour at 400 degrees F.

Regular care of your pan is simple as well- wipe it out, scrubbing with water, or without to get any food that might be stuck on. When the inside of the pan is clean, simply dry it and rub some oil over the inside to keep it from rusting.

Another reason to use cast-iron is just the way it looks. It’s got a sort of vintage feel to it, and it’s sort of cool to think that you’re cooking with the same sort of pan as some of the pioneers on the Oregon trail. Who knows, if you got your pan at an estate sale, or from your grandmother, maybe it’s even the same pan!

It can be part of your workout program

Who doesn’t want to develop a little more arm strength? With a twelve inch pan weighing in at over eight pounds, just ordinary cooking can help you develop wrist strength and tone your biceps. Just remember to use both hands so as to have symmetrical development.

And finally, my favorite reason for using cast-iron pans. I love corn bread, especially with chili. But most cornbread is only half corn, and some aren’t even that! The rest of the flour is usually wheat based, and for someone who can’t eat wheat because of allergies, or someone who is going gluten free to lose weight or for other reasons, this is highly inconvenient.

But Joy of Cooking, a wonderful cookbook, has a recipe that calls for only corn meal. And, you might be asking, what does this have to do with cast iron? Well, corn-only bread, if cooked in a standard pan, collapses and becomes a dense and unpalatable mess at the bottom of the pan. This is because there is no gluten present to maintain the structure when baking powder makes gas bubbles in the batter. Instead, the gas bubbles escape entirely, leaving behind a solid mass which cooks into something resembling a rubbery brick.

The alternative? Preheat a cast iron pan in a 400 degrees F with butter or other shortening in it for ten minutes. Pour the batter in quickly and replace in the oven. The pan’s heat will cook enough of the batter to trap the air inside, and allow for a fluffy but gluten free corn bread which is inexpensive and delicious.

Ingredients, in case you want to try it:

1 teaspoon kosher salt
Whisk until foamy in another bowl:
2 large eggs
Whisk in:
1 1/2 to 2 cups buttermilk
Add to the dry ingredients and whisk just until blended. Remove the skillet from the oven and add:
1 tablespoon bacon fat, lard, oil, or vegetable shortening