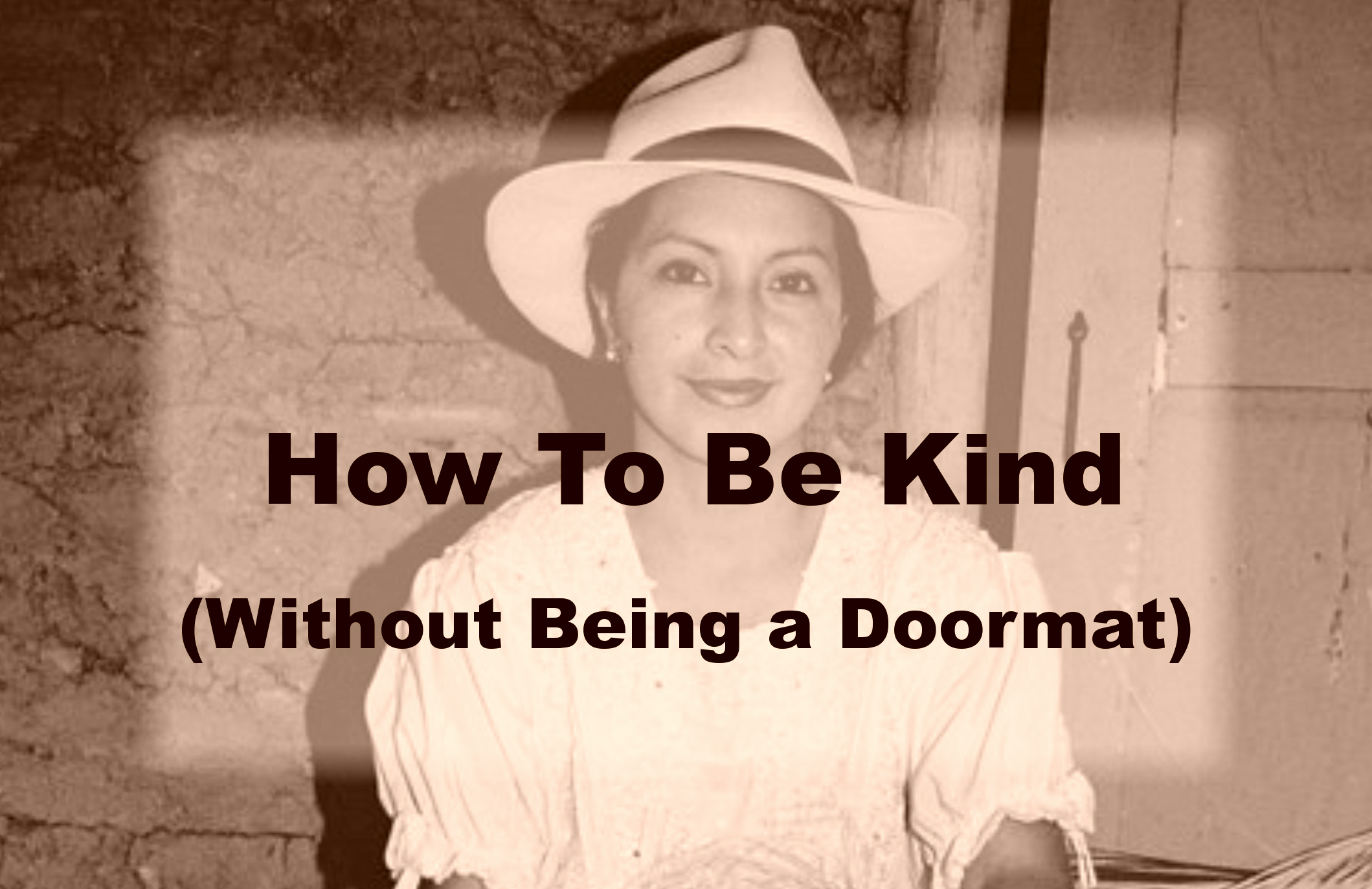 This is the second article in our series about feminine virtues. See the introduction here.

This article may contain affiliate links. Purchases through these links earn us a small commission with no extra cost to you.

You’ve all seen the nice girl. She’s nice to everyone. If anyone asks her to do anything she’ll do it. If someone says something mean to her, she won’t say something mean back. She’ll go along with whatever everyone else wants. She desperately wants love and friendship, and she’ll do anything to get it, but somehow everyone just uses her and then leaves her. When she needs help, friendship, comfort, there is no one to turn to, though she has always been there for others.

You’ve probably also met the mean girl. She demands what she wants. If you don’t like it, you need to get out of the way. She always gets her way, if not by physical force then by criticizing, demanding, and mocking. She would like to find love and friendship (she is human after all) but her abrasive personality drives away everyone but mindless groupies she despises. When she wants help, friendship, comfort, there is no one to turn to, as she has driven away anyone she would respect enough to confide in.

But what if I don’t want to be either? What if I want to have real true friends, both men and women? What if I want life to be pleasant both for myself and those around me? Isn’t there another option? There must be….

First of all, let’s look at the two stereotypes we have presented, and see what’s really going on.

The nice girl on the surface seems about as close to saintly perfection as it is possible to be. But if she is, and virtue leads to happiness as Aristotle says, then why isn’t she happy? She’s always nice to everyone, she wants everyone else to be happy—so far so good. They say happiness comes from making others happy, so she should be positively delirious with joy… But she’s not. She cries, she’s frustrated, she might end up with a nervous breakdown. And the people around her aren’t necessarily actually happy either.

The submissive girl’s difficulty is that she has no inner sense of what is her due, and what is her identity. She wants to love and be loved, like and be liked, but she has no respect for herself. Her sense of self-worth comes from being of use to others, being approved by others, being loved or liked by others. Because her self-worth is founded on this unstable ground, she is terrified of saying no to anyone. If she says no, they might not like her anymore. Wendy Shallit in her book Girls Gone Mild, tells stories of girls who give sexual favors they would prefer not to give, get in cars with drunk drivers, and are generally completely incapable of saying no to a man for fear that they will be rejected, either by the men or by society. They bend over backward to give people exactly what they want, whether it is good for them or not.

But in being unable to say no, the nice girl sabotages her chances of happiness. In everyday interactions she is seen by friends as lacking personality. She adds little to conversations and decision making processes for fear of offending or bothering someone else. Thus her friends are deprived of her thoughts and talents.

In relationships with men, she is often the victim of unscrupulous or abusive partners. She is too afraid to stand up for her rights or leave, afraid that she will not be able to find another partner, and dependent on the sense of self-worth that her abusive partner’s attention gives her. Sometimes she is even genuinely convinced that she is “making him better” and that it is her mission to stay and help him. In reality, she is enabling his dysfunctional behavior, and simply submitting to his abuse will never make him better, and will likely make him worse.

As a mother she is hopelessly wishy-washy and terrified that if she disciplines her children, they will hate her. As a result, she (and they) are unhappy and stressed.

The submissive woman, or “nice girl” is unhappy, and also fails to bring happiness to those around her. So what is the solution? Should she do the opposite? Force her ideas on everyone else, be aggressive and domineering?

The mean girl realizes that the “nice girl” system doesn’t work. Sometimes she is even a reformed nice girl. She is determined not to be a doormat. No one will force her to do anything she doesn’t want to do. She wants to be happy and independent—so far so good. She chooses her own way, and does her own thing, and gets what she wants. Sounds like a recipe for happiness, doesn’t it? Except that she too, is never happy. Why not?

While the submissive woman’s trouble is that she has no sense of self-worth that is not given to her by others, the “mean girl” has no trouble knowing who she is. She knows, and everyone else had better know it too.

The mean girl’s trouble is more that she has no sense of what is due to others. She forgets that other people also need to feel valued and respected. She has no patience for other’s shortcomings. She takes everything personally, because she wants everyone to value her as much as she values herself. She has no trouble pushing others out of her way in her quest for what she wants. She is, after all, the most important person, and no one else’s ideas or desires really matter.

But, as Aristotle says, “Without friends no one would choose to live, though he had all other goods.” And the mean girl wants friends just as much as any other human. Meaningful relationships are essential to human happiness.

But she sabotages her own chances of having these relationships. In everyday social interactions, she is is considered abrasive and domineering. She allows no one else to add their ideas and talents to a situation, and thus impoverishes her life without even realizing it.

In relationships with men, she often drives away potential partners with her controlling and derisive behavior. She demands that everything be her way, and sensible men run for their lives, leaving her with wimps who someone to tell them what to do, rather than real men who want life companions.

As a mother, she is controlling and demanding. Her children have to be perfect, strong, and submissive all at the same time. They must act like her perfect imagination of them, or else they are failures. The stress of trying to live up to this expectation damages the child, and the mother is constantly frustrated by the incompetency of all who surround her.

In order to be happy and make those around you happy, you need an internal principle which will lead to balance. In other words, you need to have standards. There should be some things that you won’t do, no matter who asks you. Don’t be afraid to set boundaries. Recognize that there are things that no one has the right to ask you. No one has the right to demand that you give up your conscience, your health or your values for them. Determine what is genuinely important, set your boundaries, and don’t budge. A polite refusal to budge on core values is one of the most admirable traits any man, woman or child can have.

Secondly, understand that everyone else also has the right to set boundaries beyond which you cannot go, and that everyone has feelings that are just as valuable as yours. So when you say no, say no politely but firmly. If the person you are refusing to change your values for is offended by this, that’s okay. You probably didn’t want them as a friend anyway.

It’s also important to be able to care deeply about other people and to do things for them and give things to them. This is an extremely important part of life and happiness. Just don’t give everything to just anyone.

In everyday social interactions the kind woman confidently presents her ideas, but often agrees to other’s suggestions as well. She listens to others opinions, and uses courtesy in agreeing or disagreeing.

In relations with men she is not afraid to say no, but when she says no, says it courteously, unless a courteous refusal has been disregarded. She tries to make the people she is with feel valued and respected. These traits will make honorable men admire and respect her.

As a mother, she is firm and caring, setting boundaries and goals and maintaining discipline. She treats each child as an individual and helps each one feel loved and cared for, and confident to try to do good and even great things.

The kind woman, liberated by her principles from the stress of trying to please everyone, will be able to please the people she cares most about in the world, and will be able to achieve her own goals of happiness and fulfillment. She will be valued by those around her, and will know how to value herself.

Graph, illustrated with characters from Pride and Prejudice

3 thoughts on “How to be Kind (Without Being a Doormat)”