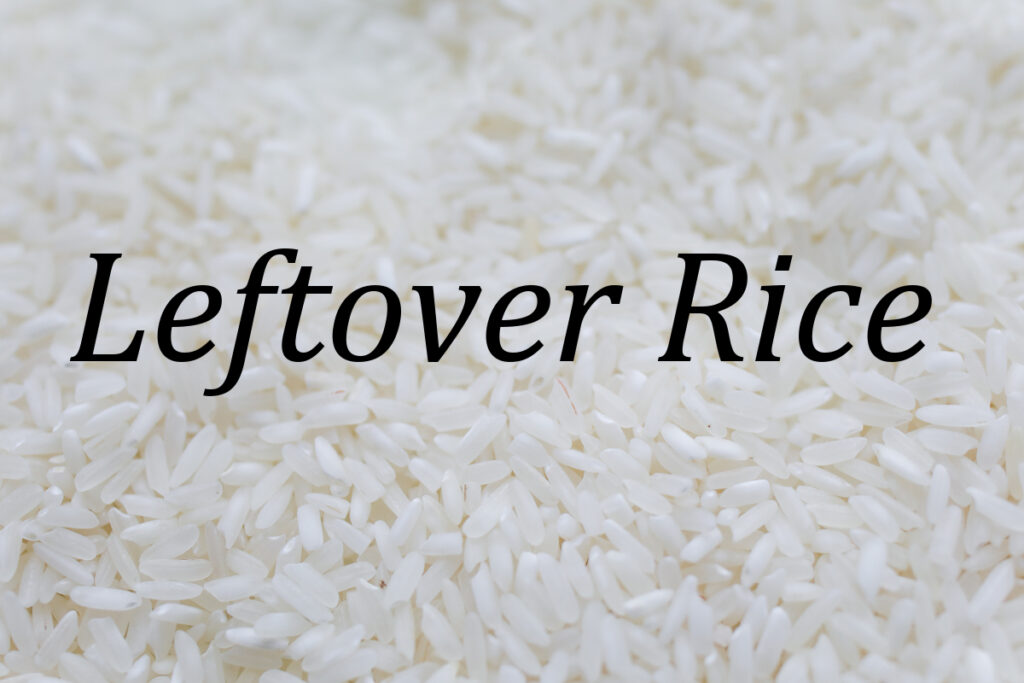 White rice is one of those things that’s just never quite the same leftover. I love white rice and we generally eat it at least once a week, often more frequently than that. We have a rice cooker, and it’s a fuss free,  inexpensive, and gluten free starch. It also goes with just about anything.

But what to do with the leftovers? Of course, you can just have “leftover night” and pull all the leftovers out of the fridge for everyone to pick something to microwave. I do my fair share of that.

But if you want to take it up a notch, or if you just don’t like microwaved leftover rice, here’s a few ideas you might not have thought of.

Fried rice is a staple at Chinese restaurants, but it’s not too hard to make something similar at home. You just need to saute some carrots and onions, maybe some peas, in oil until they are well cooked. Add the right seasonings–I like pepper, garlic, and ginger– lots of soy sauce and a little sugar, and some finely chopped meat. Then you throw your leftover rice in, stir till it’s warm, and voila! A quick one-dish meal.

Rice pudding is a surprisingly delicious dessert that uses basic staples and is pretty hard to mess up. And it’s a fantastic way to use leftover rice. If you turn your leftover rice into rice pudding, you can serve it in wine glasses at a nice dinner party and no one will ever guess that it’s Wednesday night’s supper leftovers. (Yes, I have done this.)

Here’s the recipe I generally use.

There’s a lot of nice rice casserole recipes, but the general idea behind them is that you take some meat, some veggies, some sauce and some leftover rice, mix it together or layer it into a baking pan, sprinkle cheese over it, and bake it till it’s hot and the cheese is getting golden. It’s a great way to use leftover meat and vegetables too.

Chicken salsa rice casserole is one of my favorites.

For this, you chop up some cooked chicken meat and layer it in a pan lasagna-style with leftover rice, cheese, and a sauce made of half salsa and half sour cream. Top with more cheese and bake. It is fast and easy and very satisfying. Don’t skimp on the sauce if you want it to be moist and delicious.

Eat it with bananas

I know, it probably sounds weird. The first time I ever heard of this was when my eighth grade teacher said it was good. My classmates and I, being typical middle schoolers, mostly looked at her like she’d suggested we all grow extra heads. But about fifteen years later, I suddenly decided to try it. And it was as good as she said.

Here’s what you do. Put some leftover rice in a bowl. Peel a banana and mash it up in there with a fork. Now you have a banana rice mixture. Sprinkle cinnamon over it, pour some milk in, and eat it like a cheaper, healthier version of cold cereal. I enjoy it occasionally as a bedtime snack.

I am sure I have only scratched the surface of what can be done with leftover rice. Do you have any favorite ideas?