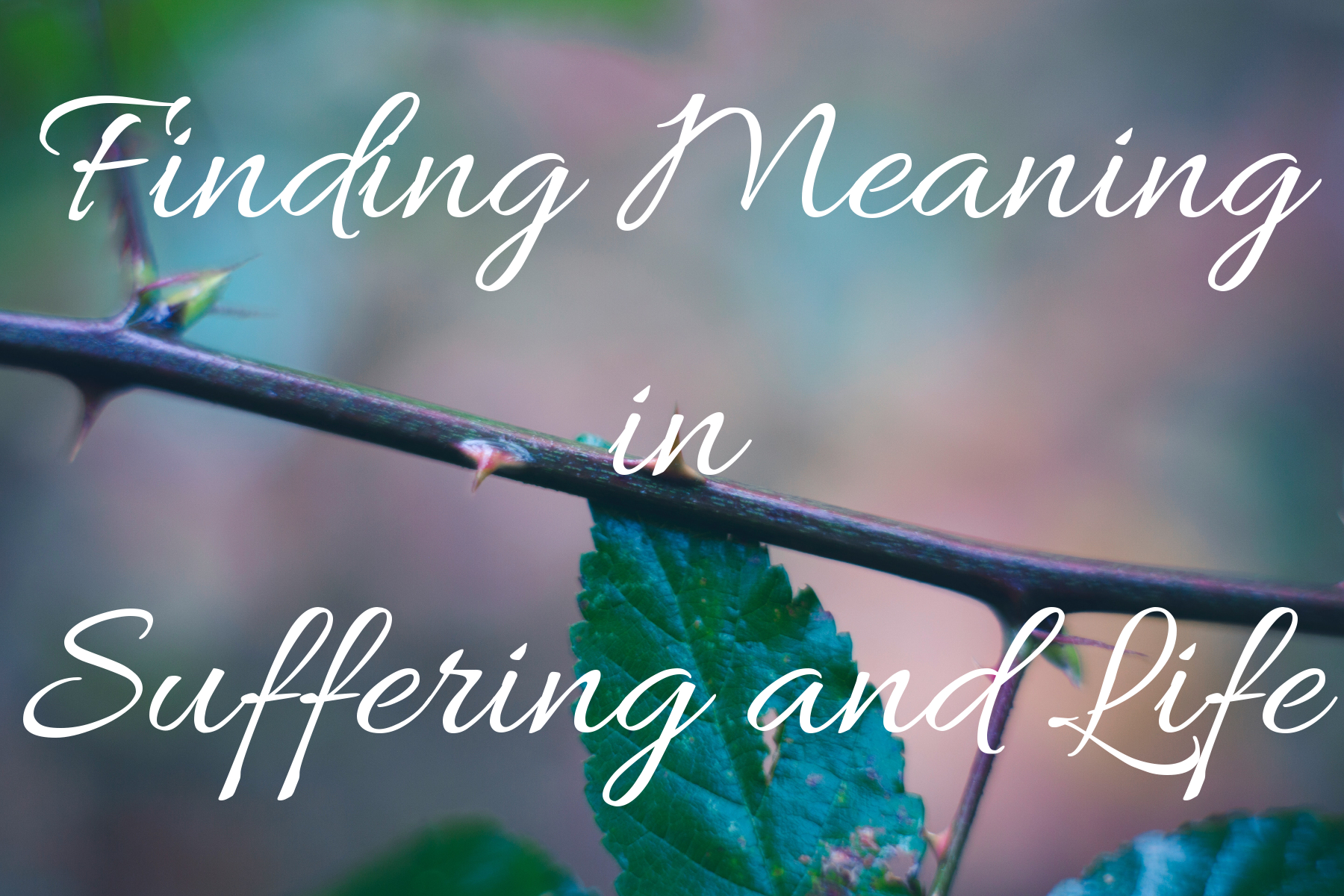 No one likes suffering. Suffering is evil.

Modern Americans are determined to eliminate pain. We keep patenting stronger painkillers, designing softer and stretchier clothes, and inventing new ways for mattresses to perfectly conform to our temperature demands.

But at the same time, many of us deliberately inflict pain on ourselves. On the healthier end of the spectrum, people work out and brag about their sore muscles, or proudly complain about their strict diets. Military boot camps are made deliberately miserable, partly to encourage physical and mental toughness, but also to give the soldiers a sense of unity and pride, since they succeeded where others did not. More unhealthily, some people form addictions to tattoos and body piercings, and finally there are the sad and desperate people who cut or otherwise abuse themselves.

But why? Pain is always seen as something to be avoided. No one likes pain. And yet people deliberately seek it out.

This is by no means a phenomenon which is limited to 21st century Americans. Most cultures have some ritual practice which involves discomfort if not actual pain. Many of these practices are religious in origin, such as fasting for Christians–and the Lenten fast used to be much stricter than it is now–or dangling yourself off hooks on procession floats for Hindus

Others are more social. In many tribal cultures boys need to prove themselves men by suffering some sort of ordeal–sometimes a prolonged, horrifying one. Girls too are often expected to undergo painful rituals to prepare them for adulthood. These ceremonies simply indicate that the initiate is now part of the tribal group, with all its rights and privileges.

But pain remains something that humans try to avoid, and rightly so. Pain is a signal our body sends that something is wrong. Pain, except considered as information, is a physical evil. And so pain cannot be sought for its own sake. This would be contrary to human nature, which is ineradicably directed towards goodness. Why then do people in every place and every time seem to seek it out?

While some more or less imbalanced people seek physical pain as a counter-irritant to mental pain, or in a misguided attempt to assuage feelings of guilt, the majority of people who deliberately undergo physical pain are looking for something else.

Everything worthwhile has a price

Nature teaches us that all good things come at a price. The beautiful flower must shrivel and die to produce the seed-bearing fruit, and the seed in its turn must die to produce a new plant. Trees must die to provide shelter and heat for humans, and animals must die so that other animals can live. No child is born into the world without pain.

Everything worth having comes at a price, and for humans, the highest price is the price of pain.

So painful tribal initiation rites, though some of the more horrifying are probably satanic perversions, have their purpose. Undergoing an excruciating initiation rite does not indicate a desire for pain as such. Rather it expresses the initiate’s desire to accomplish something great, something deeply worthwhile. If achieving full adult membership in a tribe comes only at tremendous cost, it must be worth a tremendous amount. What we value most we pay the most for, and vice versa.

Religious rites that cause pain or discomfort are similarly logical. The purpose of religion is to honor God. And how can we as humans show that we value God above ourselves but by paying some price? Sacrifice of some valued object is a common element in pagan religious rituals, as is undergoing physical pain, mutilation, and even human sacrifice. The idea is that the favors asked of the gods are worth something, and the worshipper is willing to pay that price. The greater the favor, the higher the price.

Christianity transforms this idea into something nobler. In Christianity, religion is not a servile grovelling for favors, but a simple recognition that God is God and we are creatures.  Fasting has always been a part of the Christian tradition. By fasting and other penances encouraged or allowed by the Church, the Christian shows himself and God that he values God and God’s laws more than he values himself and his own comfort. Religious vows–like the vow of celibacy that Catholic priests and religious take, or the vow of poverty that some religious take–take this idea even further.  The religious is saying that God is more important than even his primal human instincts to own property and reproduce.

Even outside the realm of religious sacrifice, Christians also believe that pain and suffering can have real value in helping people grow in virtue. But Christianity also forbids mutilation, and encourages people to seek good health and happiness, and to alleviate the pain of others.

So Christianity and human nature seem to agree that pain is both valuable and to be avoided. And while this might seem like a contradiction, it is resolvable, because it’s not really about the pain. Many of us face frustration, loneliness, depression, and anxiety. But these sufferings, while they can be so painful as to overwhelm the spirit, do not build up the person in any way. You cannot strive against a feeling of pointlessness in your life, or achieve moral victory over depression. No spiritual writer recommends feeling anxiety as a way to God.

It is not about the pain. Pain and discomfort in and of themselves are evil. Being more uncomfortable is not the recipe for virtuous living.

What is necessary for both human flourishing and Christian perfection is not suffering as such, but meaningful effort.

We humans need to strive. We need to overcome obstacles on the way to meaningful goals. What are games if not artificial obstacles we create so that we can overcome them? But there has to be a goal, a meaning to make the struggle worthwhile.

The endurance required by tribal rituals is given meaning by the social context. However brutal these rituals might be, they are undergone because they give the participant a sense that he has accomplished something worthwhile. And when he joins the brotherhood of his tribe as a full adult, having passed the test, he is closer to his fellow tribesmen than he would be without that test.

Suffering the pains of childbirth for the sake of a new life is meaningful. It is hard—I’ve done it three times, twice with no pain meds—but the results are worth it.

Suffering the pains that hard physical labor brings in order to grow food for your family’s survival; that too is meaningful. But most of us have never had to do it, and that—I think—is a good thing. It is good that most humans do not have to work every waking hour to provide a bare survival diet… but with our prosperity and comfort comes the cost of having to find a new struggle.

Christianity offers meaning. The sufferings Christians undergo, whether chosen as penance, or simply accepted as God’s will, are given meaning by our Faith, and bring us closer to God. The connection between these actions (or sufferings) and their supernatural meaning is hard to see, however.

To suffer discouragement and depression for the salvation of souls… where is the connection? Suffering loneliness for the good of your country? How does that work?

We suffer, not the same way other Christians in other times and places have suffered, but we do suffer. No Roman emperors stand by with racks, whips and ravening lions to test our Faith. The specter of starvation rarely lifts in head—the last major famine in the West was over 100 years ago. Even the fast of Lent prescribed by the Church has been mitigated.

Our sufferings come from health problems, financial worries, family drama, worry over our children’s future. And even if we manage to escape from those, mental anguish, loneliness, frustration, the pain of misunderstanding lie in wait. We might surround ourselves with more and more physical comforts and distractions to drown it out, but we cannot escape the suffering in our own minds.

But this suffering is unconnected to anything. It is not the result of striving—as the pains of childbirth or physical labor are. It is the opposite. It is the result of having nothing to aim for, no goal on the other side of our obstacles.

To be happy healthy humans, that is to say, virtuous humans, we need to strive for a difficult goal. It is the nature of humans to shrivel without a goal to live for.

But what goal? And how shall we strive? What mission can we undertake?

Yes, we strive for salvation. Yes, we strive to follow the commandments. We raise our families. We do our jobs. We do routine maintenance, the million sisyphean tasks of housekeeping and parenting. These things must be done. And we can “offer them up” along with our physical and mental pain. Spiritual writers like St Therese of Lisieux assure us that these tasks and pains and struggles can bring us closer to God, if taken in the right way. Far be it from me to contradict St Therese.

What if we need more?

I wonder sometimes, however, if we expect too much from our mental muscles. It is hard to see the connection between routine tasks done every day (even with a morning offering) and the glorious service of God.  It is hard to see how renewing car registration paperwork or suburban loneliness relate to the passion and death of the God-man and the work of salvation. Maybe you, reader, are capable of this mental workout. I personally find it all but impossible.

Much of the life of a religious involves the same daily grind as the life of a layperson. Monks and nuns have to take showers, scrub dishes, cook meals, and tidy things up, just like laypeople. But their lives are dedicated directly to the service of God, and everything about their rule is designed to remind them of this fact. They wear a uniform and live together with others who have made the same consecration. They have scheduled prayers and activities.

The religious rule is, of course, not applicable to married people like myself. It would be inappropriate for me to wear a religious habit. The very existence of babies—those maddening and delightful creatures—renders order and schedule and fixed prayer (or sleep) routines impracticable. As for life in community—well, I do believe in single family dwellings and the autonomy of the married couple, within reason.

Is it possible though that we spend more effort than necessary in doing the mental gymnastics of trying to see connection between our Faith and the daily grind, when perhaps what we should be looking for is a way to make more connection between them?

I haven’t yet come up with a solution to this question. Are active and dynamic religious third orders for married people the answer?  Or community living and radical charity as practiced in the Catholic Worker houses associated with Tradistae? Stronger parish associations?

We don’t need more suffering in our lives. What we need are more reasons to suffer. We need friends who will suffer and pray with us and for us; who will hold us accountable and encourage us. We need concrete goals to work for, a way of bringing our Faith to life in physical reality.

I don’t know what this looks like. If you have any ideas, please share them with me.

1 thought on “Finding Meaning for Suffering and Life”