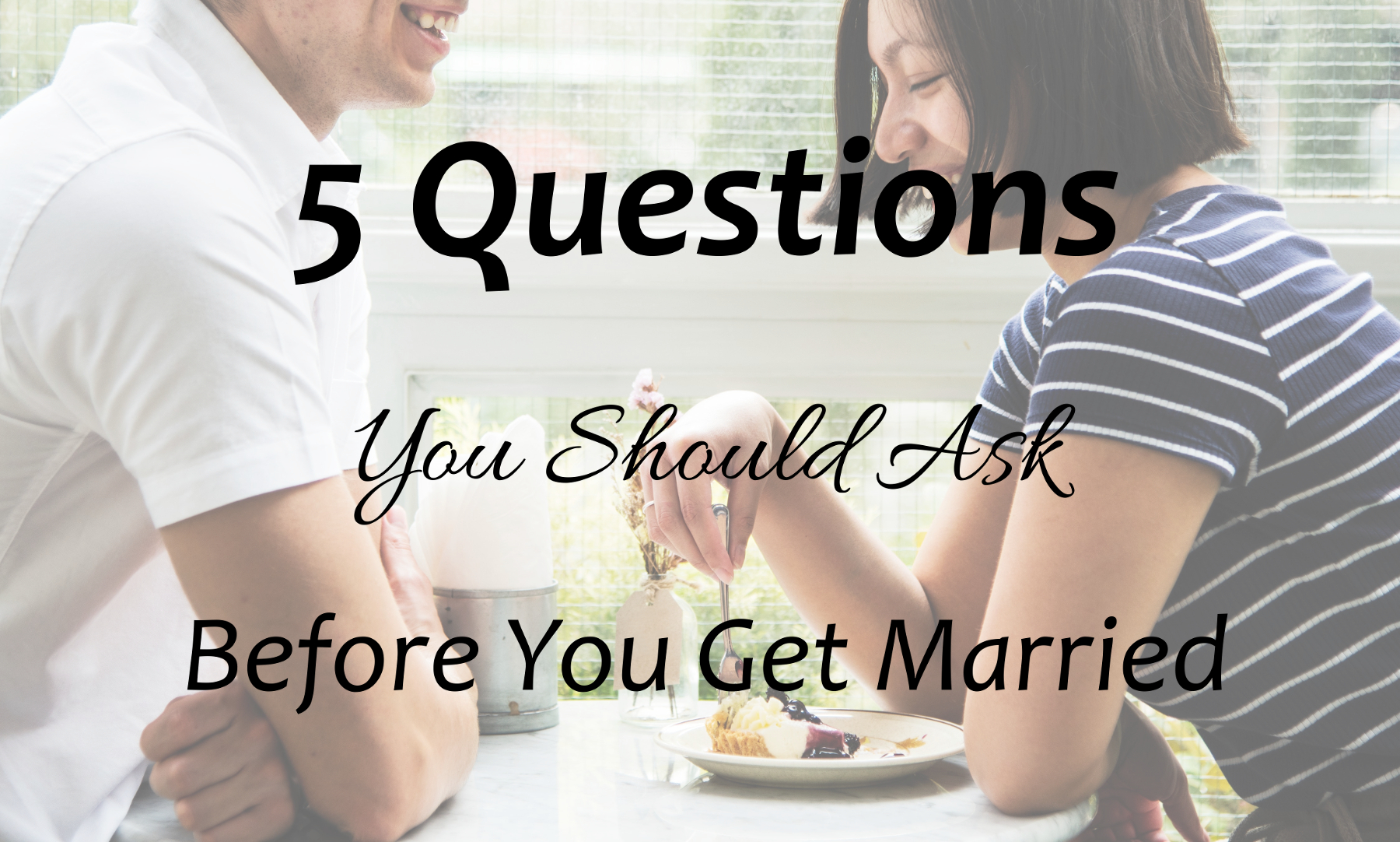 So, you want to get married, and there’s this guy… and he’s cute, and he’s nice… Is he the one? How are you supposed to know for sure? Well, one answer is that you won’t—not until you’ve married him, for better for worse. Then, he’s the only one you’ve got, so he’d better be the one.

But before you take the leap, and make the vows, it’s good to get some information on the prospective husband. Here are ten questions that should help you not be disappointed.

This is the first and most important question. Does he agree on what the priorities are? This is a good question to ask your boyfriend fairly early on in your relationship.

Does he share your religion? If religion is important to you, then you are going to want a spouse whose religion is the same as yours. Otherwise it’s likely you will end up with constant misunderstandings and confusion.

Does he ask you to do things you’re uncomfortable doing? Things that you don’t approve of? IF he does, this is a bad sign, and you should almost definitely not pursue the relationship further.

Other questions you might want to ask would involve his attitude toward having and raising children, the relationship between husband and wife and their roles in marriage, how he thinks about money. These are issues that are important to most people. If there is anything else that you consider a core value, do be sure to discuss that too. If eating sushi every Wednesday night at precisely 7:13 pm is something you consider vitally important, you should probably make sure he’s okay with that.

Does he have a goal?

Sometimes people are planning on getting married, but don’t look beyond that point in their lives. Then, once they’re married, they have nothing to strive for. And having no goal to work for is bad for people. Before you marry a man, find out if he has a goal beyond getting married to you. And make sure that goal is something you can invest in too. Being able to work together for a goal as a married couple will strengthen your relationship so much.

Why does he want to get married?

This can be a revealing question. Make sure that his reason for getting married is not because he wants a slave to do all his housework for him. He should want a companion on life’s journey, not an ornament or a minion.

Is he a psycho?

Sometimes a person with a psychological or personality disorder seems perfectly normal. I suggest investigating the person you are thinking about marrying. (Of course, if you’ve known him all your life, you should know already, but it never hurts to make sure)

Now of course, this is not a question you would ask your boyfriend. Instead, do an amateur background check by asking his friends, siblings, and roommates, if he has any. As long as you keep it simple, and don’t spy on him, steal his phone and call all his contacts or read all his emails or something crazy like that, this is a sane and normal precaution, and he shouldn’t take it the wrong way.

Does he have good manners?

We assume that since he’s trying to impress you, your boyfriend treats you well. If he doesn’t, dump him now! But will he keep treating you well, once you’ve married him and he’s not trying to win you over anymore? There’s only one way to find out.

When you are dating, be sure to arrange to spend time with your boyfriend and some other people. If he treats you well, and everyone else badly, you can be fairly sure that he will treat you badly too, once he’s not trying to win you over anymore. If, on the other hand, he treats other people well, and other people like him and think he has good manners, you can safely assume that he has habitually good manners, and that he will likely treat you with courtesy and consideration after you are married too.

Do you admire him?

They say that you become the average of the five people you spend the most time with. If this is a weighted average, it is heavily weighted in favor of your spouse. You will probably end up thinking and acting a lot like your husband after you are married. That’s just the way people work. So, are you okay with that? Would you be better if you were more like him? And will you be able to set him up as an example for your kids? Will they be better for knowing him?

How does he deal with you when you’re upset?

A good indication of how your boyfriend thinks of you is how he treats you at your worst. When you are crying or angry or otherwise upset, you probably aren’t your most attractive. If he is impatient and uncaring with you when you are upset, this could definitely weaken a future relationship. Especially if you are going to have kids. If my experience is anything to go by, then you will probably cry more during your first pregnancy than you did in the five years leading up to it. You will want a man who can stay calm and reassuring during your emotional meltdowns—because if you’re realistic with yourself, you know you’re going to have them sometimes.

Is he resilient? How will he handle an emergency?

Related to how he handles your emotional upsets is how he handles stress and emergencies. This is very difficult to know unless you are in an emergency with your boyfriend—which we all hope won’t happen. Though the idea has crossed my mind that dating would be a more productive exercise if people who were thinking about getting married chose unpleasant activities to do together, rather than pleasant ones. You’d find out so much more about your companion that way.

Now if your boyfriend is a police officer, EMT, army medic, or fireman, you can probably be pretty sure he handles emergencies well and would be a good guy to have around in a pinch. But if not, you might have to base your answer to this question on other things. If your boyfriend handles your emotional upsets well, then that’s a good sign. If he’s willing to go into situations that are outside of his comfort zone without freaking out, that’s a very good sign. And if he can admit his mistakes, that means he’s probably willing to take a chance in a risky situation, too. Which leads us to our next question.

Does he admit mistakes?

When I was dating the man I married, I remember being happy to note that first, we argued, but in a civilized way, and that I won some arguments, and he won some arguments. And that’s the way it should be. You don’t want a pushover who agrees with everything you say, but you also don’t want a man who stubbornly insists that he is right even when he’s wrong.

A person who is intellectually honest will be willing to recognize truth wherever it is found, whether in your ideas, or in his own. This will allow you and your spouse to have meaningful, constructive arguments, rather than bitter, pointless ones.

The next question is related, and is in some ways the most important of all.

Does he have a growth mindset?

Now, your boyfriend is definitely not perfect, and neither are you. And that is completely okay. If you are holding out for a perfect man, you aren’t ever going to get married. And the same goes for holding out for perfect women.

But the question you want to ask yourself is not, “Is he perfect?” but “Is he trying?” You want a man who is trying to improve, because if he is really trying to improve, then you won’t grow tired of him as you find out all his faults. Instead, you will find new things to admire every day of your lives together.

If you liked this article, consider signing up for email updates below, or sharing with any of your friends who are dating. Thanks!

3 thoughts on “Ten Questions to Ask Before You Get Married”